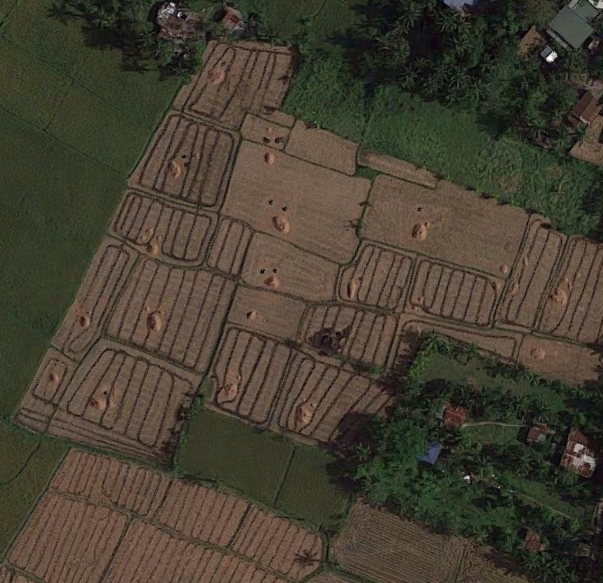 In 2014, I visited Boracay Island and met an old Ati woman who sold trinkets at the shore. Among these trinkets are tiny vials of medicinal herbs and talismans steeped in oil. I asked her what the trinkets were for, what the vials were for and she patiently described the purpose of each item for me. They were all for the care of babies and children, to alleviate all sorts of aches and pains in their bodies. These objects came from a people and culture that, even in that short and small encounter, I could tell deeply and immensely cared for their children.

I think of home, as it had once stood for me (and for others, I would think), not only as a place or a state of rootedness, but as a spirit or condition that is with you wherever you may be. It is the kind of love and care, the notion of safety that lingers even when you are alone. Home is the warm hand that had hovered above you in the earliest moments of your life and which has left its edifying imprint upon you. I speak of the warm hand as if it were a constant. There are instances when it is not. And here, I find the limitations of my understanding of home in light of what can be called a cruel age.

A Philippine law lowering the age of criminal liability to nine years old was approved on its second reading last 23 January 2019 1. Presidential spokesperson Salvador Panelo puts it brilliantly by explaining that the current law (RA 9344) encouraged drug syndicates to employ children, knowing that these children will be freed. Amending the law and criminalizing children means that the syndicates will not employ them 2. This law, it turns out, has been created out of the kind intention to protect children. Meanwhile, big time drug lords run wild and free.

The problem at hand is a result of intersecting issues on poverty, public mismanagement, health, and labor. The drug problem is a health problem, poor people use and sell drugs (but so do rich people), they are poor for a number of reasons but this does not include being poor as a choice (unless one is an ascetic or has taken up certain vows). Whether one is an adult or a child, there is one thing certain in a world of economic insecurity: selling drugs provides easy money.  Easier than begging or selling sampaguita 3 or polishing shoes in jeepneys. Ultimately, I say that the real heart of the problem is: Why does child labor still exist? Instead of putting kids in jail, we need to work on universal healthcare and education for all. One only needs the power of observation to see the where reasons for child labor bunch up: in a poor family there are too many mouths to feed and there are many mouths because there is little to no access to birth control, the parents most likely suffer from job insecurity, if they do have secure, tenured jobs, they do not make enough, if they manage to make enough it is still not enough because there are taxes and rising prices to deal with. These are not simple excuses but grinding conditions of reality an ordinary citizen is subject to and by which they live and die. In such an economic and social culture, an individual would see more benefits even in doing jobs that are high risk.

Child labor in the Philippines, or in any so-called developing nation, is common. The Philippine Statistics Authority (PSA) reported in 2016 that the poverty incidence among Filipinos registered at 26.3% or approximately 27 million Filipinos as of the first semester of 2015 4. The PSA also reported in 2017 that 1 in every 10 Filipino youths aged 6 to 24 were out of school 5. IBON Foundation, a non-stock non-profit Philippine research group, reports that in 2018, poor Filipino families are hit worst by the rising prices of commodities (with information also gathered from the PSA) 6.  Further, the 2019 budget is set to prioritize war and infrastructure over agriculture, industry, and social services. The Department of Social Welfare and Development (DSWD), a public institution that provides support and services for families and individuals living below the poverty line and in charge of rehabilitating children suffering from abuse or are in conflict with the law, will have its budget lowered by 2.2 – 2.3%, which is equivalent to an approximately Php 3.1 billion cut 7.

The DSWD is also, technically, in charge of the Bahay Pag-Asa or Hope Houses that are temporary shelters for Children in Conflict with the Law (CICLs). The nine year old drug mules who are apprehended will be sent to these shelters, for rehabilitation. These Hope Houses are under the management of a Local Government Unit (LGU) and is run by a ‘multidisciplinary team’ of a social worker, psychologist, medical doctor, and a member of the Barangay 8 Council for the Protection of Children (BCPC). The team will work on an ‘individualized intervention plan’ with the child and its family. In 29 July 2013, the Marikina City Youth House was inaugurated as a pioneer model of the Hope House 9. Some Hope Houses, such as the one in Dasmariñas City, Cavite, are managed by private institutions, in this case, De La Salle University, a private Catholic school. While neat and “monastic” 10, the privatization of public services is yet another telling sign of a shell of a state incapable or, rather, apathetic towards its citizens. One might be quick to respond that the LGU and private institution co-run these Hope Houses. The Philippine nation, however, is yet to witness an ethical and effective Private-Public Partnership.

The Philippine senate is calling for a higher budget for LGU’s Hope Houses in 2019. The RA 9344 (Juvenile Justice Welfare Act) of 2006 required 113 Hope Houses to be established, yet as of 2018, only 55 have been built. Atty. Trisha Oco, Executive Director of the Juvenile Justice and Welfare Center, notes that the Php 400 million budget for the establishment of these Hope Houses were only released in 2013 11, a year after the RA 9344’s first amendment RA 10630 was issued. Further, Atty. Oco has also commented that these Hope Houses were substandard, its derelict conditions led children to self-harm rather than rehabilitate 12.

The irony that I am using statistics and information from state institutions (the PSA and DSWD) while criticizing the very state that runs these institutions does not escape me. Who, among these voices (of the state or those independent), is telling the truth? I have no idea. And yet, these voices, for all their irony or inadequacy and fallibility, make my observations seem more compelling. The philosophical and even metaphysical dimensions of this essay are aspects that I wish to step into no further.

Weariness and Filipino bones are old friends 13. I think of what anti-natalists have been rallying for quite some time now and what the character of Rust Cohle from True Detective has put into words: “I think the honorable thing for our species to do is to deny our programming. Stop reproducing, walk hand in hand into extinction— one last midnight, brothers and sisters opting out of a raw deal.”  In this cruel age, it must be a luxury to wish for kinder deaths.

Zeny May Dy Recidoro is a scholar and writer taking up an MFA in Art Writing at the School of Visual Arts in New York City. She is also an Asian Cultural Council fellow (2018 - 2019). She was born and raised in the Philippines. Read some of her writings at www.3510b75.wordpress.com